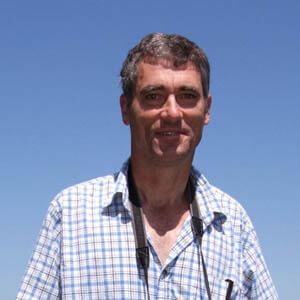 The paintings of Ken Bucklew evoke the essence of Indiana’s natural heritage. When viewing Ken’s paintings up close you’ll notice the impasto texture and complex application of color. When viewed from a distance, you’ll see the realistic imagery of pure southern Indiana.

The ability to draw and paint what I saw came naturally. Since I was a young child my interests in nature and art began to define me. There were “old timers” I would hang around with after church on Sunday to listen to their outdoor stories. They were fur trappers, ginseng diggers, beekeepers and small farmers.”

While still in high school, Ken’s work began earning him recognition and awards. After high school, in the summer of 1975, he suffered a spinal injury in a diving accident resulting in total paralysis from the neck down.

After months of hospitals and rehabilitation Ken recovered his ability to walk but has lingering physical limitations that he has learned to compensate for.

Ken received a degree in commercial art in the late 70’s and after graduation worked for various publishing companies creating artwork for commercial applications. He also continued with traditional oil paintings of Owen County scenery. These paintings garnered awards and sales in various exhibitions.

“I quit doing all commercial work in the early 90’s and began to focus on traditional oil painting. I like to draw little maps and notes on the backs of paintings so that whoever owns them 100 years from now can see it as I did.”